At the beginning of the year, a local rider, Luke Shelly, from Tamworth got in touch with us on our Facebook page. He was looking for sponsors to support him through the 2013 Triumph Triple Challenge. It is his début year in the challenge and he seems to be learning fast. Here are a few updates from his recent races. 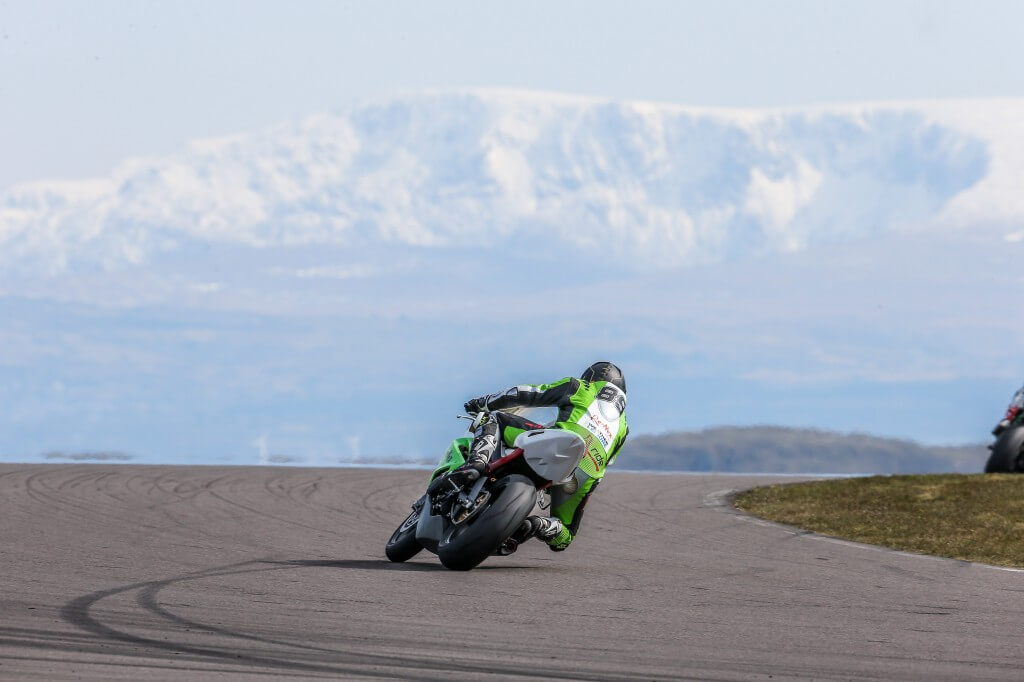 Friday: I had one 20min session to get correct settings for qualifying on Saturday. Unfortunately it didn’t go to plan and I really struggled to get and feel on the front yet, so I struggled throughout the whole session. The conditions weren’t great wither with the track been damp and cold. Saturday: Qualifying: The conditions on the track were great the sun was shining too! We knew the suspension set up wasn’t right so we made sure to have all the tools we needed to make little adjustments. During the 20min qualifying session I pulled into the pits 3 times to make front and rear suspension changes which proved to have worked and placed me on the 2nd row in 7th position. I was really pleased with the result as we didn’t expect to have the pace we did so early in the season. Race 1: I was starting from the second row and I got a awful start pushing me down into 12th position but within the first 3 laps I pulled back to 10th, were I finally found a decent rhythm and started to put in faster laps as the race went on unfortunately on lap 7 my handle bars pulling in the frame of the bike forcing me to enter the pit lane and retire from the race. Not the start to the season we wanted considering I was running in a great position in the race. Sundays Race: Race 1: Due to the DNF in race 1 it put me back on the 4th row of the grid in 15th position, I knew I had to get a good start otherwise id get stuck and not progress. Fortunately I got a decent start into turn 1 but got blocked into druids and lost around 5 positions. So I dropped back into 18th place across the line after lap 1 then I started to get on the gas and pulled back to 15th were I finished but learnt a lot about the bike, which these first rounds are all about. Overall the weekend seemed ok the highs of qualifying and the lows of a DNF, I know I’m capable of running with the front guys. I just need more time on the bike and no doubt the team will be a front runner.”

“Unfortunately Thruxton only hold two bike events a year, so getting to test on the track before the races was impossible. So we went into the round not having a idea of bike set up or track lay out. Saturday: Practice: I had 20mins to learn the circuit and getting a good setting as the track was so fast and bumpy all the way round. I went out and did around 10 laps just to get a idea on the track and where it went. I pulled into the pits after the 10 laps to see how I was doing and I was 10seconds a lap slower than the leader, So my dad sent me back out and told me to get on the gas sooner. At the end of the session I pulled it back to been 4 seconds a lap slower, which is still a mile off where I wanted to be. Qualifying: I went out late to qualifying as the conditions were horrible it was pouring it down. My dad told me to go out and do 5 fast laps, which I did and I thought I did well but when I pulled in I was informed in was down in 24th position. That was a huge shock as I thought I was pushing really hard. My dad gave me a little talk and sent me back out on track, where my lap times tumbled down and I placed 7th on the grid for the race. Race 1: Due to the weather conditions the race was cancelled which was gutting due to my pace in the wet conditions first time riding in the wet. Sundays Race: Race 1: Starting from the 2nd row was a big boost. I was on the grid waiting for the lights to go out, when they did my reaction time was awesome but the front wheel lifted and I had to back off loosing all my drive into turn 1 and I dropped back to 15th. I then pulled through to 11th leading the pack, where I had a awesome battle though the whole race but unfortunately got beaten up on the last lap and dropped back into 15th position but still came away with championship points, so im still really chuffed, not where we want to be but I’ve got so much to learn. I hope to have chance to go testing in the 3 week break, to try close the gap to the leaders at the next round at Oulton Park.”

Practice: Due to having chance to test at the circuit once before we almost had a decent set up for the dry but we decided to try something different with the suspension to see if it worked. After first practice I was in 16th position, which isn’t where we wanted to be at all. We made a few changes before qualifying to try and get the optimum out of the bike. We also turned up to practice 7mins late, so we barely got any laps in. Qualifying: Went out on the new settings and the bike seemed perfect everywhere around the circuit, it was myself that lacked the knowledge of the track in all fairness but we put in a good time of a 46.009 which was almost the target we set of a 45 second lap. I ended up on the 3rd row in 12th position for race 1. Race 1: I got a awesome start pushing my way through the pack into turn one but got held up on the straight and dropped down in the 21st. I then pushed to the limit till the end of the race picking them off one by one to get back up to 12th position across the line. I also got the target lap time we wanted a 45 flat. Race 2: We had to start from 16th on the grid in race 2 as everyone else picked up the pace and put in a faster lap time. We got a steady start holding my position for the first few laps then I started to chip away and start going through the pack to 11th then hunted down to try get in the top 10 and caught up with them on the last lap and got myself in 10th across the finish line taking it by only .059 of a second. ” Well done Luke, we look forward to seeing you in action soon.

Building a new website with an agency. Everything you need to know.