Some of the most creative work that a business does is around its paid media, advertising and PR. So we always find it astounding that they do not feature these in their content plans for their site. It’s a lost opportunity, from “making of” videos to building a bank of press releases that press can actually link to.

In fact, at a business where we were consulting, we usually set up two types of press releases – one for general release, the other for the site, with in depth links and information that the brief version didn’t have – and we would all calls to action from the general release into the in depth versions so that people reading the release get to see the full version, (and often as a result link to it). These also over time build up a good chronological record of the businesses PR strategy.

It astounds us that people who load up popular TV adverts on Youtube make good money doing it – yet the brand that created and distributed the advert often don’t. Although it’s not a bad thing if someone ELSE loads up your advert – in an ideal situation being able to capture those views and subscriptions of video channels would make future releases easier to spread.

However, it’s not just video that ought to be built up, press adverts, external adverts etc. ought to all be given a place within a sites structure – you never know when something becomes successful enough to start driving its own traffic. There are so many iconic pieces out there that either reside in companies own internal archives or in someone’s collection. We would love to see these pieces being built out as content portals and online archives.  Wrigleys for example have attempted this (although execution left a little to be desired) and so have brands such as Gucci. 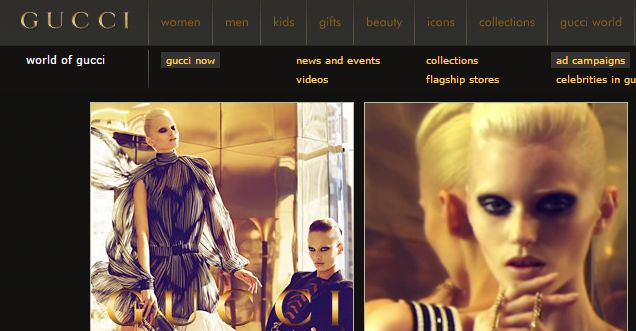 Back to Community and Social
Next to Product or Service Data